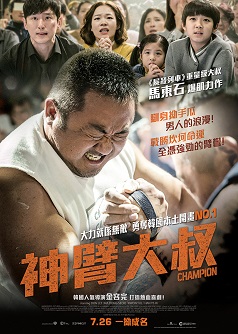 Mark is a disgraced arm wrestling champion who was adopted by an American family when he was a boy. He’s a bouncer at a club and befriends a Korean student named Jin-ki, who has a knack for making quick cash in any given situation. Lured by an arm wrestling tournament in Korea and Jin-ki’s scheme to make a fortune from it, Mark comes back to his native country for the first time in 30 years. When he arrives, Jin-ki gives him his biological mother’s address. Hesitant at first, he visits the address and gets united with a sister he didn’t know existed. Embraced by a new family, he prepares himself to make a mark on the tournament.
Director
KIM Yong-wan
Cast
Don LEE (MA Dong-seok), KWON Yul, HAN Ye-ri
Release Date
26-07-2018
Language
Korean
Run Time
108 minutes
You may also like