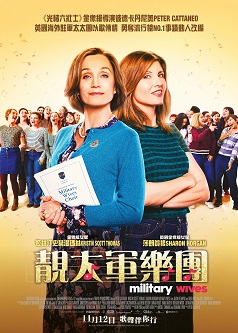 “What would life be? Without a song or a dance, what are we? So, I say thank you for the music, for giving it to me…” The life of a military wife can be thankless. Separated from loved ones and staring down the barrel of anxiety and loneliness, their quiet bravery and sacrifice unnoticed while they live with the dread of a fateful knock on the door. But Kate (Kristin Scott Thomas), the perfect officer’s wife, bears it all with grace and stoicism. She finds freedom in song; and persuades a ragtag group of women on the base to form the Military Wives Choir. Initially sceptical and embarrassed by such an amateur bunch, newcomer Lisa (Sharon Horgan), a rebel and rocker to the core, is quickly transformed by the choir’s friendship, humour and courage. Finding their voice together, Kate, Lisa and the choir put two fingers up to stuffy military tradition, anti-war protestors and their own personal differences.
Director
Peter Cattaneo
Cast
Kristin Scott Thomas, Sharon Horgan
Release Date
12-11-2020
Language
English
Run Time
112 minutes
You may also like