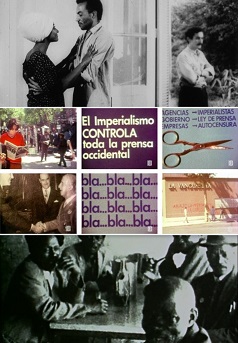 Movie Name: Monangambeee
Language: French(English Subtitles)
Category: I
Duration: 16 mins
Director: Sarah Maldoror
Cast: Carlos Pestana, Noureddine Dreis, Mohammed Zinet
Story: A tribute to Sarah Maldoror, the French filmmaker who died in April, aged 90, after contacting the coronavirus. Her directorial debut is set in a jail in Portuguese-ruled Angola, when a prisoner meets his wife. She promises to bring him a meal; the sadist guards insists in reading the offer as something sinister, and subjects the prisoner to brutal torture for a plot that simply isn’t there. Two years onwards from working as Gillo Pontecorvo’s assistant on The Battle of Algiers, Maldoror delivered a short film which is poetic in its depiction of his protagonist’s inner anguish, and powerful in its political message about the brutality of colonial oppression. Filmed in the newly independent Algeria and boasting a haunting score by free-jazz titans Art Ensemble of Chicago, Monangambeeee is a monument for an internationalist approach towards filmmaking Maldoror helped foster later with her collaboration with Chris Marker on his Sunless (1982).

Movie Name: The Fourth Estate
Language: Spanish(English Subtitles)
Category: I
Duration: 39 mins
Director: Helena Lumbreras, Mariano Lisa
Story: What’s the role of the press in a country ruled by a dictatorship — and how could everybody pitch in to nurture their independent voices? Financed partly by Pier Paolo Pasolini and produced at a time when Spain was still ruled by the fascist tyrant Francisco Franco, The Fourth Estate offers a sharp critique of a cowed and compromised mainstream media. More than just an analysis of a tragic past, filmmakers Helena Lumbreras and Mariano Lisa encourage viewers to resist by “creating, financing and reading your press” through clandestine publications everybody could craft in their own homes — a move which helped usher in the return of democracy in Spain in 1975. An evocative essay film comprising photographs, archive footage, interviews with silhouetted journalists and visual instructions about how to produce homemade publications, The Fourth Estate is as relevant as ever, as 21st century governments continue to crack down on press freedom.

Movie Name: End of the Dialogue
Language: English(No Subtitles)
Category: I
Duration: 45 mins
Director: Members of the Pan-Africanist Congress
Story: In 1969, a group of exiled South African activists formed a collective with British film students in London with the aim of presenting the world with visual evidence of the the impact of the South African whites-only government’s racial segregation policies on the country’s black population. End of the Dialogue is the first fruit of their tortuous labour, a film based on footage they filmed secretly in South Africa and then smuggled to Britain for post-production. While the film illustrates their message loud and clear, it doesn’t do so simply through tubthumping: over a calm and matter-of-fact narration, the documentary is a masterful editing exercise, as the filmmakers contrast the white minority’s opulent existence (rugby, mansions, marching bands) with the black majority’s squalid lives (4am commutes, dusty roads in dilapidated townships, barren schools), and how the latter — alongside the “coloured” and the “Asiatics”— were condemned to a less-than-human existence.
Director
--
Cast
--
Release Date
12-07-2020
Language
---
Run Time
100 minutes
You may also like