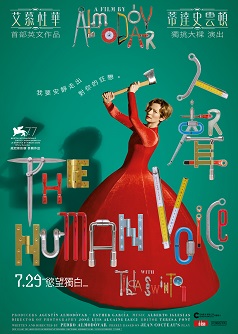 Pedro Almodóvar teams up with Tilda Swinton for his first English-language short film, freely based on Jean Cocteau’s play. A woman watches time passing next to the suitcases of her ex-lover (who is supposed to come pick them up, but never arrives) and a restless dog who doesn’t understand his master has abandoned him.

The Human Voice was shot over nine days in a locked-down Madrid in July 2020 and premiered to critical acclaim at the Venice Film Festival 2020.
Director
Pedro Almodóvar
Cast
Tilda Swinton
Release Date
29-07-2021
Language
English, Spanish(In Parts)
Run Time
30 minutes
You may also like