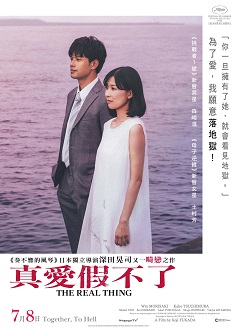 Tsuji is a good man, but he has casual relations with two women in his workplace. One day he saves the life of a mysterious woman, Ukiyo, who was about to die in a crossing. Ukiyo's off-guard attitude causes lots of problems but Tsuji saves her every time when Ukiyo is in trouble, which leads him to an even worse situation. Japanese arthouse auteur Kōji Fukada reaches new artistic heights with this noir thriller based on the graphic novel by Mochiru Hoshisato. The Real Thing originally produced as a ten-episode TV series, this epic romance is now being presented in a new director’s cut, in the shape of a four-hour feature film. The film is the official selection at 73rd Cannes Film Festival.
Director
Kōji Fukada
Cast
Win Morisaki, Kaho Tsuchimura, Shohei Uno, Kei Ishibashi
Release Date
08-07-2021
Language
Japanese
Run Time
232 minutes
You may also like