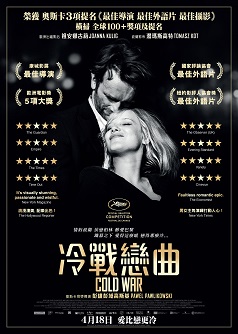 Swept away more than hundred awards and nominations including Cannes Film Festival Best Director Award, five European Film Awards and Oscars Best Foreign Language Film nomination, Cold War is a passionate love story between a man and a woman who meet in the ruins of post-war Poland. With different backgrounds and temperaments, they are fatally mismatched and yet fatefully condemned to each other. Set against the background of the Cold Wat in the 1950s in Poland, Berlin, Yugoslavia and Paris, the couple are separated by politics, character flaws and unfortunate twists of fate- an impossible love story in impossible times.
Director
Pawel Pawlikowski
Cast
Joanna Kulig, Tomasz Kot
Release Date
18-04-2019
Language
Polish
Run Time
88 minutes
You may also like