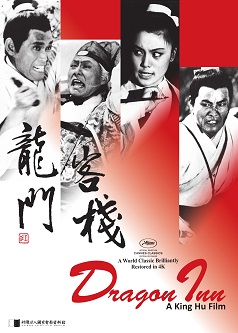 Based on Ming-dynasty history of emperor being dethroned and the political machinations of powerful eunuchs, Dragon Inn tells the story of the loyal and upright Minister Yu being accused and killed by the evil and powerful eunuch Cao (Bai Ying). Yu's remaining children are sentenced to exile to the border Dragon Gate. After several assassins were sent to kill Yu's children on their way but did not succeed, Cao sends killers of East Chamber, the espionage agency. A righteous cadre of swordsman comes to Dragon Inn to rescue Yu's children. A tense battle of wits and swords unfold as the contending parties, each hiding their true intentions, vie to complete their missions first. With masterfully crafted fight sequences both inside and outside the inn, this sprawling action epic is a master-class of pacing, tension, and choreography, as aptly foreshadowed by the Dagger Group Prelude featured at the start of the film.
Director
King Hu
Cast
--
Release Date
07-12-2019
Language
Mandarin
Run Time
111 minutes
You may also like