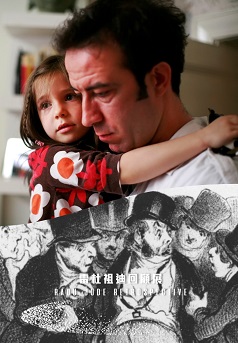 Marius, a divorced man in his 30s, wants one thing and one thing only: to pick his toddler up from his ex-wife’s apartment and for a day of dad-daughter bonding on the seaside. Nothing will stop him from doing so, as he swats aside – sometimes literally – his estranged wife, her new husband, cops at the door, and even the girl herself. Set largely within the claustrophobic confines of a middle-class apartment, Everybody in Our Family is a staggering tale of a domestic dispute spiralling into a maddening maelstrom. With each and every of his gestures – he could be a whining wreck one moment and a thundering thug the next – Marius epitomises a society in which pretences of civility could barely conceal the narcissistic instincts bubbling within. With one swipe, Jude proclaims how it’s cruelty, rather than, charity that begins at home.

Screened with: Caricaturana
Language: Romanian(English Subtitles)
Category: I
Duration: 9 Mins
Director: -
Cast: -
Story: Using a series of 19th century lithographs depicting a litany of bombastic swindlers of the day, Jude muses on the representation of physical gestures in art and how they could be made to invoke a wild variety of visions and ideas in a viewer’s mind. Probably the only time Sergei Eisenstein and Gwyneth Paltrow are mentioned in the same film.
Director
Cast
Şerban Pavlu, Sofia Nicolaescu, Mihaela Sîrbu, Gabriel Spahiu
Release Date
17-12-2021
Language
Romanian
Run Time
112 minutes
You may also like