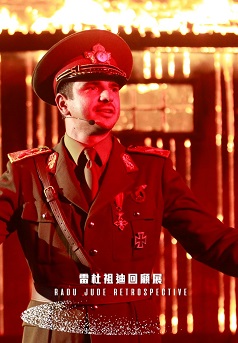 As performances go, stage director Mariana Marin’s latest is as audacious as any. Her plan is to stage, in a large public square in Bucharest, a “stylised, compressed and theatrical” re-enactment of the state-sanctioned slaughter of 34,000 Jews in the Romanian-occupied Ukrainian city of Odessa in October 1941. As she prepares for the event, she’s forced to confront actors who are either aghast at her take on history or seem to be a bit too keen to play killers; crew members who are more interested in technique rather than her theme; and self-proclaimed liberals evoking poetry and so-called common sense to censor her work. But it’s only during the live spectacle itself that long-buried id of Romanian society is unleashed for all to see. Filmed with a mix of Super 16mm and digital video, Radu Jude’s magnum opus is a gritty, dynamic reflection on reality and fiction, history and art, remembrance and forgetting, and nationalism and humanity (or the lack thereof). The title of the film comes from a notorious quote from Romanian dictator Ion Antonescu when he ordered that massacre 70 years ago. Jude’s film reveals how, scarily, the long-dead autocrat’s not the only one thinking that way - now.
Director
Radu Jude
Cast
Ioana Iacob, Alex Bogdan, Alexandru Dabija, Ion Rizea
Release Date
20-12-2021
Language
Romanian
Run Time
138 minutes
You may also like