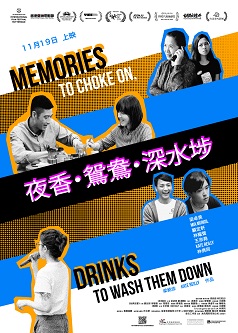 Four Bittersweet Stories of Hong Kong: About Nostalgia and the Future; Revisits Memories and Confronts Reality

FORBIDDEN CITY: Two immigrant Hong Kong women – one from mainland China, one from Indonesia – live together in a little village. They take turns outwitting each other on an epic journey to the big city.

TOY STORIES: Brothers return to their working-class neighborhood for one last hangout in their mother’s toy store. With new responsibilities looming, they take refuge in behaving like children.

YUEN YEUNG: A local economics teacher and a "native English-speaking teacher" from the States spend one school year crisscrossing Hong Kong. As they say goodbye, they recall connecting and disconnecting over after-school snacks.

IT'S NOT GONNA BE FUN: A young barista and music-video star puts aside her many interests to run for district council. She fights both a pro-establishment incumbent and her own disdain for human interaction.
Director
Leung Ming-kai, Kate Reilly
Cast
--
Release Date
19-11-2020
Language
Cantonese, English
Run Time
78 minutes
You may also like