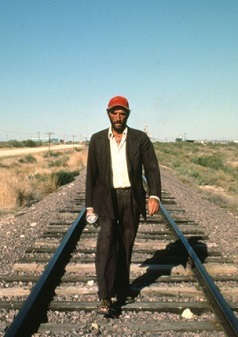 Paris, Texas is probably Wim Wenders’ most well known, critically acclaimed, and successful movie, winning a number of international prizes including The Cannes Palme D’Or for Best Film in 1984.

This unusual road movie, with screenplay by acclaimed playwright Sam Shepard, tells the tale of Travis, a man lost in his own private hell. Presumed dead for four years, he reappears from the desert on the Mexico border, world wears and an amnesiac.

He traces his brother Walt who is bringing up Hunter, his seven year old son, his ex-wife Jane having abandoned him at Walt’s door several years before. As virtual strangers, Hunter and Travis begin to build a wary friendship and conspire to find Jane and bring her back to be a real family.