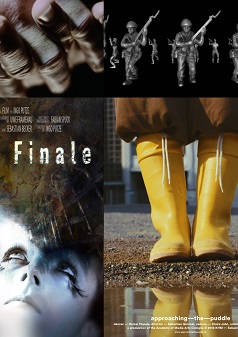 Around puddles a curious woman, appropriately dressed for a rainy day, dances in child like play, drifts into a fantastic inner world, unravels a magical place as her rubber boots come to life.

Three performance-artists are moving scattered around a concrete desert. The sounds that occur from their contact with the environment develop bit by bit into a rhythm.

Lola is an anatomical decryption of a sculptured being, who’s minimalistic micromovements are made sensible through the use of choreographic montage. The body is decomposed, reconstructed and multiplies itself.

An experimental LGBT video dance short movie about secrecy, vulnerability and roses. The rose's connotation of secrecy dates back also to Greek mythology. Aphrodite gave a rose to her son Eros, the god of love; he, in turn, gave it to Harpocrates, the god of silence to ensure that his mother's indiscretions were not disclosed.

Toy soldiers marching and moving in harmony, spinning and rotating, erupting and exploding. When conflict becomes a spectacle, the lines between destruction and entertainment get blurred.

It is a dialogue between yellow and blue. The story is told through music and dance and is about silence and movement.

In and Out of Control

It seems that control is a very important part of life in the twenty-first century, both on a global and personal level. In and Out of Control represents the breakdown of a man who is used to commanding the lives of everyone around him. When developing the character, Förster’s chief question was one that William Burroughs put best: "Is control controlled by its need to control?"

Solo Finale is a story of a relationship gone away. Depicted through poetic, surreal pictures, where the physics of the world we know do not always apply, it is an allegory of the polarity of love. It is about the forces that draw and repel us. It is an allegory for the contradictions in life. Ingo shows this through a relationship between a man and a woman that goes very wrong. It is about curiosity and lust, use and abuse, and the mistakes we make over and over again. And we end up in a new place with no map to find our way back home...