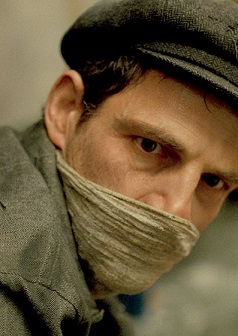 October 1944, Auschwitz-Birkenau. Saul Ausländer is a Hungarian member of the Sonderkommando, the group of Jewish prisoners isolated from the camp and forced to assist the Nazis in the machinery of large-scale extermination. While working in one of the crematoriums, Saul discovers the corpse of a boy he takes for his son. As the Sonderkommando plans a rebellion, Saul decides to carry out an impossible task: save the child’s body from the flames, find a rabbi to recite the mourner’s Kaddish and offer the boy a proper burial. Directed by Laszlo Nemes, SON OF SAUL was honored Jury Prize at Cannes Film Festival.
Director
Laszlo Nemes
Cast
Geza Rohrig, Levente Molnar, Urs Rechn
Release Date
23-12-2018
Language
Hungarian, Yiddish, German, Russian, Polish
Run Time
107 minutes
You may also like