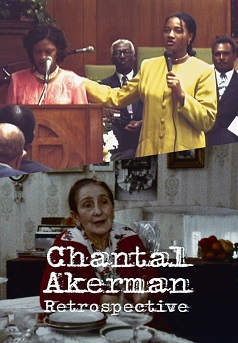 Movie Name: Tell Me
Language: French, Yiddish
Category: I
Duration: 46 Mins
Director: Chantal Akerman
Cast: -
Story: A rarely-shown gem from Chantal Akerman’s oeuvre, Tell Me bears all the director’s hallmarks as an empathetic listener about other people’s pains and a perceptive documentary maker who knows how to relay those testimonies to the screen. Commissioned by French TV channel TF1 to make a short documentary about grandmothers, Akerman films herself visiting three matriarchs across Paris to listen to their rites of passage as young Jews, their recollections of the Holocaust and how they survived the ordeal – with all their stories and songs, plus Akerman’s own mother’s in a voiceover, forming a tight tapestry documenting the horrors of the Shoah. Sitting there, at once like a respectful psychiatrist and an awestruck child, Akerman provides the women with the platform to speak of a trauma they have suppressed for years, and one could sense it’s as cathartic as it’s empowering.

Movie Name: South
Language: English(English Subtitles)
Category: I
Duration: 71 Mins
Director: Chantal Akerman
Cast: -
Story: On 7th June, 1998, an African-American man named James Byrd Jr was abducted, assaulted, chained to the back of a pickup truck and dragged for miles on a small back road to his death in a small town in Texas – the latest in a string of racially motivated crimes committed by white supremacists in the ascendant across the American South. The murder sparked a massive outcry, and Chantal Akerman was among the first and few filmmakers who travelled to the scene of the crime, talked to the locals and observed the aftermath in order to make sense of the monstrous racist undercurrents surging through rural America. The talking heads might look quite out of place in Akerman’s oeuvre, but that long tracking shot on the road where Byrd met his demise is a powerful, emotional image similar to any of her explorations about trauma, space and time.