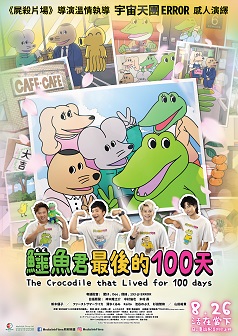 One day in March when the cherry trees were in full bloom, a group of friends met up to view the cherry blossoms, but WANI never showed up. Worried, his good friend NEZUMI set out to fetch him on his motorcycle. While on his way, NEZUMI took a photo of the cherry blossoms and sent it to his friends. WANI’s phone, lying on a road with its screen broken, received the photo.

In the last 100 days of his life, WANI told a gag to make NEZUMI laugh when he visited NEZUMI at the hospital; WANI phoned his mum, who sent him oranges every year; he had a crush on a girl he worked with; he had ramen with his friends; he engaged in his favourite activities – playing video games, basketball and watching movies… WANI’s life was typically ordinary.

100 days after the cherry blossom party, the cherry trees are now green and the fluttering petals replaced with rain. Unable to bear the memories of WANI, his friends gradually lose touch with each other. Meanwhile, someone new shows up in their town – KAERU, who is very positive, takes the group of friends by surprise…