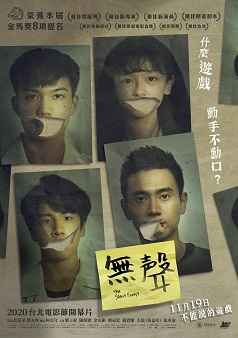 Deaf teenager Chang Cheng transfers to a school for children with special needs. However, the world of the hearing-impaired doesn’t seem quiet at all. When Chang witnesses the “game” taking place in the last row on the school bus, his excitement about blending into a new environment immediately turns into fear. Seeing Bei Bei, the girl he has a crush on, getting hurt so badly, Xiao Guang, the ringleader, behaving like a king and other schoolmates acting innocent, Chang debates with himself on whether he should reveal the cruel truth about the game or whether he should join in. As the divide between the perpetrators and the victim begins to blur, confusion and anxiety grow among everyone in school.
Director
KO Chen Nien
Cast
Liu Zi Chuan, Buffy Chen, Kim Hyun Bin
Release Date
19-11-2020
Language
Putonghua, Taiwanese(In Parts)
Run Time
104 minutes
You may also like