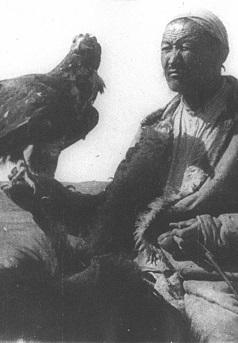 Before A Man With A Movie Camera, there’s A Sixth Part of the World. Splicing together footage brought to him by eight film crews, Russian montage master Dziga Vertov’s 1926 film remains an epic panorama of wildly varied lives across the country making up a sixth of the land mass on Earth. We see urbanites commuting to work on trams and country folk hunting for food in the arctic north; Muslims in a majestic mosque in Central Asia, and young Buddhist monks in a temple. There’s the harvesting of wheat, the production of dairy goods, the spread of electricity across the country. Defying socialist realism by teasing a new universe out of his hyper-editing, A Sixth Part of the World is at once a nation-building exercise and a striking piece of avant-garde cinema. Screened with a musical score by British composer Michael Nyman.
Director
Dziga Vertov
Cast
--
Release Date
10-07-2020
Language
No Dialogue with Russian Intertitles
Run Time
74 minutes
You may also like