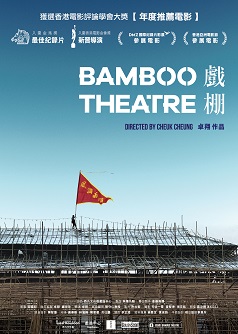 While permanent theatres are commonly built in most cosmopolitan modern cites, Hong Kong preserves a unique theatrical architecture, a Chinese tradition that has lasted more than a century – Bamboo Theatre. It is a makeshift, open-air and bamboo shed theatre, which is built and fixed by plastic straps, without any heavy-duty materials. During festivities in the villages, they will invite Chinese opera troupes to perform ritualistic opera in the temporary theatre constructed in front of the temple, in order to express their gratitude to the Chinese gods they worship. Spirits and gods were the primary audiences.

This film follows ritual practices in various villages and remote islands of Hong Kong for two years. It is the portrait of this traditional cultural space, its way of building and dismantling, also the collaborative work of troupes’ performers, stage managers and wardrobe, etc. It allows audience to observe multiple corners of the space, and the variety of ways in which people make use of it.
Director
Cheuk Cheung
Cast
--
Release Date
20-12-2019
Language
Cantonese
Run Time
76 minutes
You may also like