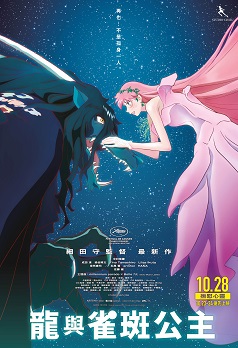 Our protagonist, Suzu, is a 17-year-old high school girl, who lives in the countryside of Kochi Prefecture with her father, after losing her mother at a young age. She loves singing with her mother more than anything else, but as a result of her mother’s death was no longer able to sing. It wasn’t long before she and her father grew more and more distant from each other, and Suzu closed her heart to the rest of the world. When Suzu felt that writing music was her only purpose left in life, she then discovers the massive online space known as “U,” where she takes on her persona, Belle. Suzu quickly realizes that when she is inside “U” as her avatar, Belle, she can sing quite naturally. As she continues to showcase her own music in the virtual world, she fast becomes the rising star of “U.” Nonetheless, that surprise is short-lived. Suddenly, a mysterious dragon-shaped creature appears before her…
Director
Mamoru Hosoda
Cast
Voice Cast: Kaho Nakamura, Ryo Narita, Shota Sometani, Tina Tamashiro, Lilas Ikuta, Kouji Yakusho, Takeru Sato
Release Date
28-10-2021
Language
Japanese
Run Time
121 minutes
You may also like