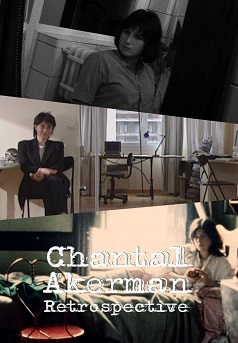 Movie Name: Blow Up My Town
Language: No dialogue
Category: IIA
Duration: 13 Mins
Director: Chantal Akerman
Cast: Chantal Akerman
Story: Experimental and terrifying, Chantal Akerman’s debut embodies the pattern and tension between spaces and people and their lives. The long takes increase the tension as we watch, unable to help, or change or influence what we see. We are voyeurs witnessing something horrible, powerless to do anything other than witness.

Akerman said she was inspired to become a filmmaker when she saw Jean-Luc Godard’s Pierrot le fou as a 15-year-old. At the age of 18, she made a suitably and appropriately subversive debut the French maverick would certainly approve. Set mostly within the small confines of a kitchen, Blow Up My Town sees Akerman playing an erratic teenager who cooks, eats, cleans in a manner that undermines the social norms dictating what a housewife should do. Living up to the title of the film, Akerman’s final on-screen act shatters expectations of people usually have for a woman, if not an aspiring filmmaker barely out of her teens.


Movie Name: The Room
Language: No dialogue
Category: I
Duration: 11 Mins
Director: Chantal Akerman
Cast: Chantal Akerman
Story: Having experienced an artistic epiphany in New York watching Michael Snow’s minimalist, structuralist films, Chantal Akerman teamed up with the equally rebellious French cinematographer Babette Mangolte for The Room, a 11-minute short comprising nothing but circular pans of a cramped apartment complete with all sorts of domestic detritus – and, at its centre, Akerman slouched on her bed, eating an apple and looking at the camera in a piercing gaze at once determined but also blasé. A meditative film which seduces us to look for details and all the meanings they might entail, The Room is a captivating and complex piece which far outweighs its length and simple premise.

Movie Name: Chantal Akerman by Chantal Akerman
Language: French, English(In Parts)(English(In Parts) Subtitles)
Category: IIA
Duration: 67 Mins
Director: Chantal Akerman
Cast: -
Story: In 1996, the producers of the legendary French TV series Cinema of Our Times – in which cineastes are invited to make a documentary about their fellow filmmakers – approached Chantal Akerman for her input. Ever mischievous, she suggested – perhaps in jest – that she could make an “auto-portrait” about herself, but only with snippets from her work doing the talking. This collage still makes up the second half of Chantal Akerman by Chantal Akerman, as the filmmaker stitches images from her wildly different films – from experimental documentaries to fictional features and everything in between – to construct a narrative of her creative life. But this quilt of images is preceded by a roaming monologue from Akerman herself, a self-analysis of her own filmmaking through, among other things, Godard’s JLG/JLG, a joke about a Jewish merchant and his cow, and her mother’s views on art. A very emotional and useful primer for understanding Akerman’s innermost thoughts.
Director
Chantal Akerman
Cast
Chantal Akerman
Release Date
19-05-2021
Language
Run Time
91 minutes
You may also like