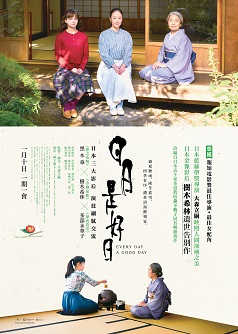 Nearing the end of university, Noriko is not having much luck finding either herself or a job when her mother suddenly suggests she study tea ceremony. Noriko is cool to the idea, but her cousin Michiko likes it and suggests they both go. Nearby lives Mrs Takeda, a tea ceremony teacher who, as people say, is not ‘your ordinary old lady.’

In the following years Noriko drifts from job to job, loses a boyfriend and then her father. The only constant in her life is the tea ceremony, in whose tightly prescribed movements and rhythms she eventually finds a unique sense of freedom. With its tea ceremony-inspired emphasis on the five senses and the changing seasons, this is a moving drama that finds life and energy from an unexpected source.
Director
Tatsuhi Omori
Cast
Haru Kuroki, Kilin Kiki, Mikako Tabe
Release Date
10-01-2019
Language
Japanese
Run Time
99 minutes
You may also like