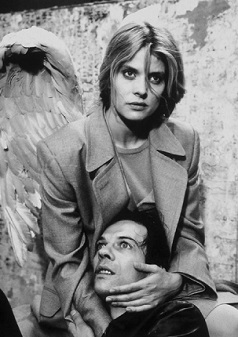 The film opens with the angel Cassiel (Otto Sander) standing on the statue of the Angel of Victory overlooking post-Cold War Berlin. Growing ever more despondent over his fate as a mere observer of human life, rather than a vital part of it, Cassiel dreams of "crossing over" to the human world. And he does, as Karl Engel, a man who perhaps knows too much, perhaps like in many of Hitchcock's films, some harmless citizen who gets involved in an affair to which he is not up to. In fact, there is no one as kind and harmless as this newborn citizen of the Earth.

We will follow Cassiels's adventures into a "thriller." This story which gets mangled with his own life is about weapons, more precisely about a weapon deal where the weapons - or INSTRUMENTS of violence -- are traded for IMAGES of violence.
Director
Wim Wenders
Cast
Otto Sander, Bruno Ganz, Peter Falk
Release Date
25-10-2020
Language
German, English(In Parts)
Run Time
147 minutes
You may also like