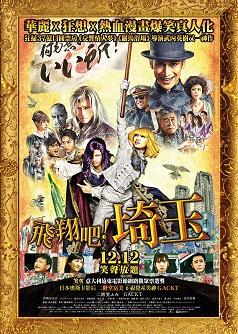 Once upon a time, the people of Saitama Prefecture were severely maltreated by Tokyo-ites. They couldn’t even enter the city without a passport lest they be forcibly expelled. The sensational manga “Tonde Saitama” (still unfinished) which takes dissing Saitama to a new level is coming to the big screen! The original story of the persecution of Saitama-ites by their superior neighbor Tokyo comes to life under the direction of the master of comedy and emotion, Hideki Takeuchi (“Thermae Romae”, “NODAME CANTABILE”). Also making appearances in this spectacle of epic proportions, is Chiba as Saitama’s chief rival prefecture, the detached observer Kanagawa, the unexplored realm of Gunma, Ibaraki, Tochigi and the entire Kanto region. An over-the-top saga of “love and revolution”! Don’t be misled by the “diss Saitama” theme, as this larger-than-life extravaganza is a serious exploration of the theme: “love of one’s roots”!!
Director
Hideki Takeuchi
Cast
Gackt, Fumi Nikaido, Yusuke Iseya
Release Date
12-12-2019
Language
Japanese
Run Time
106 minutes
You may also like