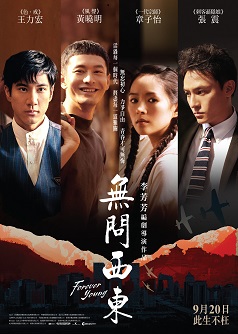 From World War, to revolution and ultimately rebirth, Forever Young is the story of four generations spanning a hundred years of modern Chinese history. Each generation faces its own unique set of challenges. Up against corporate corruption, the trials and tribulations of the Cultural Revolution, and one's duty to nation in time of war, they are faced with choosing their individual paths through history. But as the challenges and turmoil of each generation may differ as time changes, what was learned in the past cannot help but effect the choices that are made in the future as it is passed down from generation to generation. And that is the universal message that being true to yourself is precious. It is the source of strength that empowers one to become the person they want to be, to march forward as far as their hearts desire, into the future.
Director
Fangfang Li
Cast
Ziyi Zhang, Xiaoming Wang, Leehom Wang, Chen Chang, Chusheng Chen
Release Date
20-09-2018
Language
Mandarin, Cantonese(In Parts), English(In Parts)
Run Time
139 minutes
You may also like