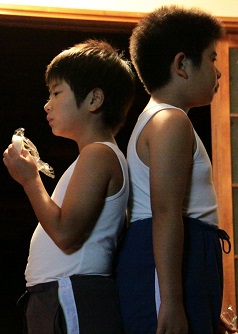 When the first bullet two trains to run on the new Kyushu Shinkansen line crossed paths, a miracle will happen. This rumor is the beginning of the story. On the opening day of the Kyushu Shinkansen (bullet train) Line, the Tsubame will head south from Hakata while the Sakura will head north from Kagoshima. If you stand at the exact spot where these two trains pass each other, it is said your wish will come true. Sixth grader Koichi hears this rumour and wants to bring about a miracle of his own. His younger brother lives far away and he wants them to live together as one family again. Their parents are divorced: Koichi lives with his mother and grandparents in Kagoshima, while his brother and father live in Fukuoka. The brothers make a grand and crazy plan involving their friends, parents and the people around them. And it is this plan that will bring a miracle to all.
Director
Kore-eda Hirokazu
Cast
Maeda Koki, Maeda Ohshirô, Uchida Kyara
Release Date
09-07-2018
Language
Japanese
Run Time
128 minutes
You may also like