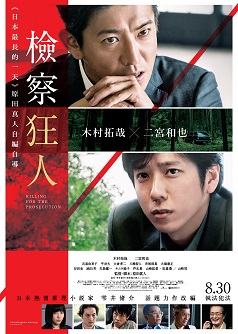 The story revolves around two prosecutors who collide over a murder case. A murder occurs in metropolitan Tokyo—the perpetrator unknown. Assigned to the case are Mogami, the ace prosecutor at the Public Prosecutors Office, and Okino, a newcomer in the Criminal Investigation Department. Mogami sets his sights on one man among many suspects and pursues him tenaciously. The man, Matsukura, is none other than the prime suspect of another unsolved murder for which the statute of limitations has expired. Okino, who considers Mogami his mentor, tries hard in interviews to get a confession out of the suspect, but the man continues to deny involvement and maintains his innocence. Eventually, Okino begins to have doubts about Mogami’s direction. “Is Mr. Mogami setting up that suspect as the perpetrator?” Two prosecutors confront each other over a justice of their own. What outcome awaits their battle?
Director
Masato Harada
Cast
Takuya Kimura, Kazunari Ninomiya
Release Date
30-08-2018
Language
Japanese
Run Time
122 minutes
You may also like