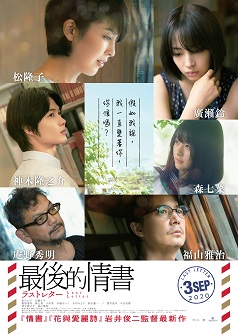 After Misaki Tono's death, her sister, Yuri Kishibeno, decides to attend Misaki’s high school reunion and share the news to her ex-classmates. Beyond Yuri’s expectation, everyone including Yuri’s first love Kyoshiro Otosaka has mistaken her as Misaki. Not knowing that the real Misaki has passed away, Kyoshiro starts writing letters to her whilst Yuri continues to play along as Misaki. One of the letters is sent to Misaki's home address and read by Ayumi, Yuri’s niece. These letters slowly reveal the past, the present and the truth leading to her mother’s death… and how they are all intertwined and connected by love.
Director
Shunji Iwai
Cast
Takako Matsu, Masaharu Fukuyama, Suzu Hirose, Nana Mori, Hideaki Anno, Ryûnosuke Kamiki
Release Date
03-09-2020
Language
Japanese
Run Time
120 minutes
You may also like