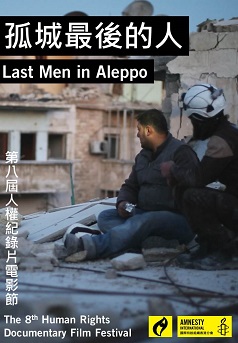 Ever since the violent suppression of the 2011 Arab Spring, the local authorities, the Kurdish people, ISIS and the anti-government armies have been seeking to divide Aleppo, a city located in north-western Syria, between them. For so many years the people of Aleppo have been suffering from warfare, even though their greatest wish is merely to live a peaceful life. Sieges and continuous bombing have led to the depletion of resources and widespread destruction of the city, up till the point where it has become unbearable for the citizens. Together, they set up a pro-opposition volunteer organisation, the White Helmets. By following the tracks of bomber planes, they aim to trace down and rescue survivors from the ruins using only basic equipment that they can afford. Three members of the White Helmets led Fayyad and his crew through their journey between life and death, where there is ruthless murder as well as selfless sacrifice, and where one could reach out to hope even in the darkest corners of hell.

This film was awarded the World Documentary Grand Jury Prize at the 2017 Sundance Film Festival; and was a nominee for the 2018 Academy Award for Best Documentary Feature.