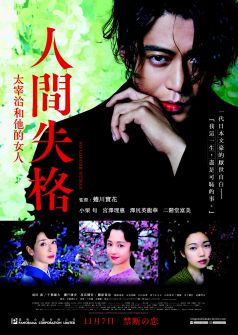 Genius writer Osamu Dazai. Although he has a pregnant wife, Michiko, and two children, there are continuous rumors of affairs and repeated suicide attempts. He has become a star of the time by repeatedly releasing best sellers even though he has gotten on the wrong side of the Establishment because of his eccentric way of life. Dazai falls in love with Shizuko, an aspiring writer, through her literary talent, and they love each other intensely. At the same time, he seeks salvation through Tomie, a widow. Dazai’s life goes crazy when his two mistresses wants a child, but he is spurred on by Michiko who still believes in her husband's talent, and he finally starts writing the story of " a man disqualified as human" that can only be written by him alone...
Director
Mika Ninagawa
Cast
Oguri Shun, Miyazawa Rie, Erika Sawajiri, Fumi Nikaidō
Release Date
07-11-2019
Language
Japanese
Run Time
121 minutes
You may also like