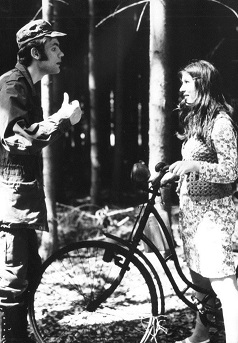 o.k. is the film which brought the Berlin Film Festival to an abrupt halt in 1970 — and sowed the seeds of the birth of the Forum the next year. Relocating a barbarous war crime committed by a group of US soldiers in Vietnam— in which GIs abducted, raped and murdered a local woman— to the German countryside, Michael Verhoeven’s film was denounced by jury president George Stevens as “anti-American”, prompting a public row, the cancellation of the festival altogether, and the decision to kick-start a new section to accommodate audacious fare at the Berlinale. But there’s more to o.k. than this legacy: employing Brechtian “distancing” aesthetics — the actors are shown preparing for their roles at the beginning of the film, and they speak German while playing their US and Vietnamese characters— the film also forces viewers to confront the horrors of a faraway war in a setting much closer to home.
Director
Michael Verhoeven
Cast
Friedrich von Thun, Hartmut Becker, Wolfgang Fischer, Eva Mattes
Release Date
12-07-2020
Language
German
Run Time
76 minutes
You may also like