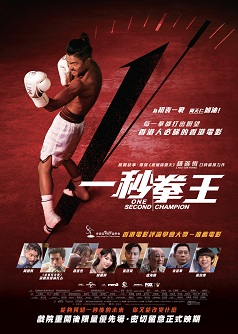 Tin Yen was born with a superpower of foreseeing one second ahead, but it didn’t bring him any luck so far. Now a middle age man, he is still a loser who needs to take care of a young son with partial hearing loss and has no respect of his superpower.

One day, a boxing-holic, Shun, witnessed how Tin Yen defeated a loan shark gang by himself. He is determined to hire Tin Yen as his training assistant to beat the local boxing champion Joe. During the preliminary round, Shun had to withdraw from the match due to asthma attack. Tin Yen had no choice but to stand-in for Shun. Out of expectation, Tin Yen won with his one-second power.

Tin Yen realized in order to gain back his son’s respect, he has to get himself together. Thus, he agreed to be properly trained by Shun. Suddenly, Tin Yen has turned into this new sensation “One Second Champion” who is on his way to the finals. However, due to an accident, Tin Yen lost his superpower. Will he be able to beat the killer champion Joe on his own and will Tin Yen be able to win his son’s respect in the end?
Director
Chiu Sin Hang
Cast
Endy Chow, Chanon Santinatornkul, Chiu Sin-hang, Lin Minchen, Lo Hoi Pang, Ben Yuen, Justin Cheung, Hung Cheuk Lok
Release Date
11-03-2021
Language
Cantonese
Run Time
98 minutes
You may also like