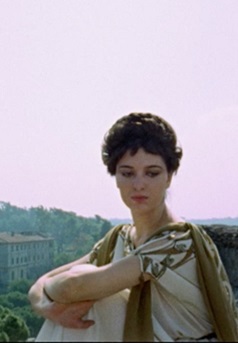 Based on a 17th century French writer’s rarely-performed play about power-grabbers in the Roman Empire, Jean-Marie Straub and Danièle Huillet’s first film in colour is as relevant now as it was in 1970. How can it not be, when the story involves the political elite striking deals away from the masses? Revolving around the ascent of Othon, a general whose scheme to take over the empire requires him to marry the emperor’s niece, Straub-Huillet’s film juxtaposes period artifice with contemporary reality. While dressed in period attire and asked to deliver their long lines rapidly and flatly, the actors play out the story amidst Roman ruins while traffic whirls beneath them. Immersive in its imagery, internationalist in its scope and immortal in its call for people’s rights to choose their fates in their turn, it’s hardly surprising French literary icon Marguerite Duras once wrote: “Don’t be stupid, go see Othon.”
Director
Jean-Marie Straub, Danièle Huillet
Cast
Adriano Aprà, Anne Brugmagne, Olimpia Carlisi
Release Date
11-07-2020
Language
French
Run Time
85 minutes
You may also like