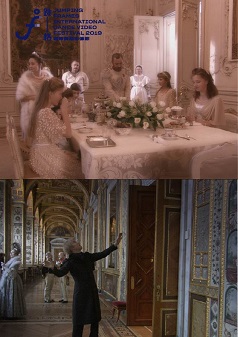 Invisible to everyone around him, a contemporary filmmaker magically finds himself in the Hermitage in St. Petersburg - back in the early 1700s! He meets a cynical French diplomat from the 19th Century; the men become accomplices in an extraordinary time-travelling journey through Russia’s turbulent past - ending in the present day.

Exploring the splendid corridors and salons of the Palace, the Marquis and the filmmaker witness astonishing scenes from the Tsarist Empire!As their time-voyage unfolds in a single, uncut Steadicam shot, the two men engage in a passionate and ironic dispute. The Marquis clearly has a Western love-hate relationship with Russia, whereas the modern filmmaker questions his country's uneasy connection to its past and to Europe today. The two tease each other, and share their amazement at the scenes they encounter.