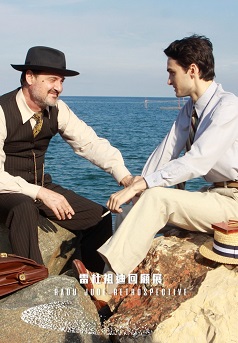 Summer, 1937. Emmanuel, a witty but pallid man in his 20s, is admitted to a sanatorium by the Black Sea to receive treatment for spinal tuberculosis. The suitably serene environment and the comforting company of his fellow patients seem to promise recovery, but despair lurks in the approach of the medical staff and the increasingly toxic political atmosphere on the outside. Radu Jude’s second period drama is inspired by the work and life of writer Max Blecher, a “loose adaptation” which infuses the source material with the social and historical circumstances whirling around Romania and Europe during those interwar years. But it’s also a chronicle of a future foretold, with the anti-Semitism and authoritarianism a harbinger of things to come. But the danger is gift-wrapped with such beauty: shot on 35mm with vintage lenses, and the Academy Ratio image retrofitted with rounded corners, Jude channels the visual spirits of all his cinematic heroes, from Yasujiro Ozu and Huillet-Straub.
Director
Radu Jude
Cast
Lucian Teodor Rus, Ivana Mladenović, Ilinca Harnut, Şerban Pavlu
Release Date
22-12-2021
Language
Romanian
Run Time
141 minutes
You may also like