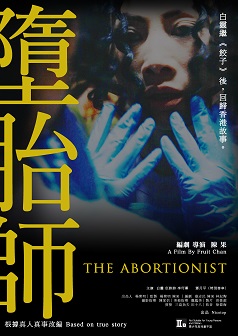 Middle-aged single mother Jane (Bai Ling) teaches Tai Chi, but also has a secret life as a black market abortionist. Her customers come from different social classes and age ranges, including desperate underaged teenagers too afraid to find legal solutions.
Out of the blue, Jane’s 16-year-old daughter Kiki (Ng Wing-sze) asks that she sign the lease of their apartment over to her on her 18th birthday. Jane is shocked and refuses on the spot, suspecting that Kiki’s estranged father is behind the demand. Her home is her only security in a densely packed city where property and land are predominantly controlled by the rich.
Kiki runs away, and moves in with her father across the border in Shenzhen, China. When Jane visits her daughter’s school to demand that she return home, Kiki ignores her. Jane remembers that Kiki had recently kicked out one of her underaged customers, and lectured her mother about the sacred nature of life. At the time, Jane had explained to Kiki that her illegal work had paid for her daughter’s upbringing. Out of love for Kiki, Jane retires and even joins a church where she repents her sins.
Months later, Kiki faints on the street. She wakes up in hospital with her mother by her side...
Director
Fruit Chan
Cast
Bai Ling, Ng Wing-sze, Larine Tang, Viann Li Yu-tsun, Onitsuka
Release Date
16-12-2019
Language
Cantonese, Mandarin(In Parts), English(In Parts)
Run Time
115 minutes
You may also like