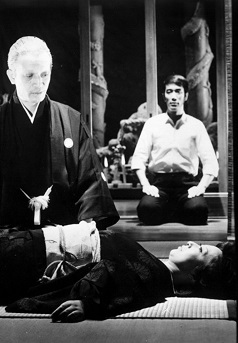 Just as its title suggests, The Ceremony is filled with rigorously choreographed rituals of all sorts: a wedding to a non-existent bride, a funeral of a tyrannical patriarch, the attainment of adulthood through sex, and the burning of personal possessions as a sign of self-sacrifice for the greater good of his clan. Nagisa Oshima portrays all this and more as a satirical show of the absurd excesses of Japan’s stifling, xenophobic social norms, all of them embodied in the declining fortunes of a conservative, incest-addled clan. Unfolding as a string of flashbacks as the prodigal protagonist Masuo travels to his hometown to investigate a mysterious telegram about a death in the family, The Ceremony is a thinly-veiled allegory of post-WWII Japan’s distorted historical and social realities. Oshima documents his country’s ills through highly-stylised sequences filmed with static camerawork that conveys vividly the suffocating environments his characters live and die in.

There will be a post-screening talk on 19/9- Looking For New Entry Points to the World- you are welcome to stay behind. (The Talk will be conducted in English)
Director
Nagisa Oshima
Cast
Kenzo Kawarazaki, Atsuko Kaku, Atsuo Nakamura
Release Date
10-07-2020
Language
Japanese
Run Time
122 minutes
You may also like