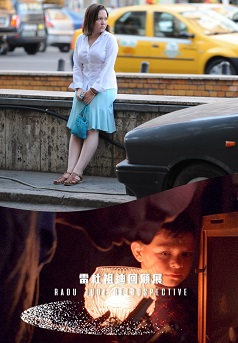 Having served his apprenticeship as an assistant director on The Death of Mr Lazarescu, the film which propelled the Romanian New Wave into international prominence, Radu Jude’s first feature bears all the hallmarks of that social-realist classic. But with a twist: rather than steeped in working-class misery, The Happiest Girl in the World is set in a “new” Romania awash with all the glimmering yet deceptive trappings of capitalism. Having won a car in a PR campaign sponsored by a soft-drinks company, teenager Delia arrives in Bucharest to film a TV commercial and then collect her prize. Standing between her and her dream are her parochial, passive-aggressive parents on one side, and the brutal, sardonic production crew on the other. Unfolding mostly within a few hours on one single street corner in the Romanian capital, Jude’s debut manages to encapsulate what’s wrong with post-communist Romania in its entirety, with humour and heartbreak aplenty.

Screened with: The Tube with A Hat
Language: Romanian(English Subtitles)
Category: IIA
Duration: 23 Mins
Director: -
Cast: Marian Bratu, Gabriel Spahiu
Story: Seven-year-old Marian wants to watch a Bruce Lee film on TV in the evening. But the tube’s broken, and the repairs shop is miles away from the village he lives in. So begins the boy and his dad’s long trek into town to get the telly fixed. Radu Jude: “It’s a story about poverty, hope, sacrifice, everyday life, parenthood and communication.”
Director
Cast
Andreea Bosneag, Violeta Haret, Vasile Muraru
Release Date
16-12-2021
Language
Romanian
Run Time
122 minutes
You may also like