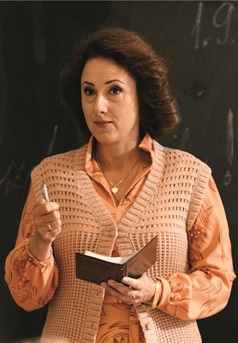 Since the arrival of the new teacher, Maria Drazdechova, to a Bratislava suburban school in the year of 1983, life has turned upside down for students and parents. The convincement of the teacher’s corrupted behaviour and one of the students' suicide attempts that could be related to that matter, makes the school Principal call the students’ parents for an urgent meeting that will suddenly put the future of all the families at stake. They are asked to sign a petition to move Drazdechova out of the school. The teacher’s high connections within the Communist Party make everyone feel threatened, but at his point they have no choice but to make a decision: will they dare to go against Drazdechova and stand up for what they believe in at any risk, or will they just remain silent and let things be? Zuzana Mauréry is awarded best actress of Karlovy Vary International Film Festival. Directed by Jan Hřebejk, Best Director of Czech Lion Awards.
Director
Jan Hrebejk
Cast
Zuzana Mauréry, Csongor Kassai
Release Date
10-03-2019
Language
Slovak, Czech
Run Time
103 minutes
You may also like