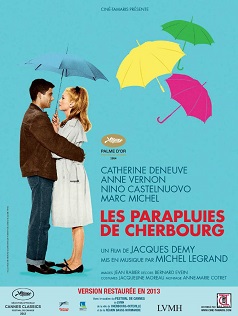 Cherbourg, November 1957. Madame Emery and her daughter, Genevieve, run a store called The Umbrellas of Cherbourg. Genevieve is in love with Guy, a mechanic working in a garage. When her mother learns of the relationship, she disapproves. Guy lives with his aunt, who is seriously ill. He is called to do his military service in Algeria. The two lovers must part.
Pregnant and desperate because she has little news of Guy, Geneviève is forced by her mother to marry Roland Cassard, a rich wholesaler of precious stones. She leaves Cherbourg with her mother.