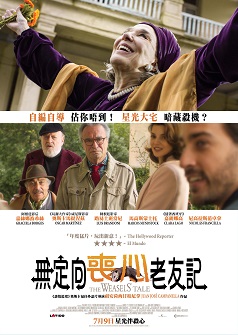 A beautiful star from the cinema Golden Age, an actor in the twilight of his life, a witty scriptwriter and a cunning director live together in a mansion where they have created an unusual environment. The arrival of a young couple seeking to persuade the actress to sell the house, forces the other inhabitants to come together and conspire to prevent it. “The Weasel’s Tale” is Juan Jose Campanella’s first live-action feature after his Oscar-winning film “The Secret in Their Eyes”.
Director
Juan Jose Campanella
Cast
Graciela Borges, Oscar Martinez, Luis Brandoni, Marcos Mundstock, Clara Lago, Nicolas Francella
Release Date
09-07-2020
Language
Spanish
Run Time
129 minutes
You may also like