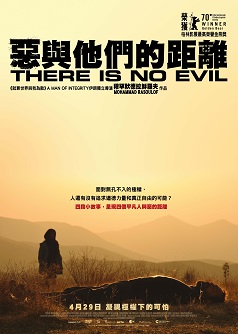 Known for his staunch criticism of Iran’s theocratic government, Mohammad Rasoulof returns with a startling work made in violation of a government filmmaking ban. Shot in secret and told in four discrete chapters, There Is No Evil reveals the mechanism behind Iran’s prolific death penalty: ordinary military men tasked with carrying out the executions. Utilising varying tones and characters, Rasoulof explores the paradoxical dilemma faced by men living their lives while performing the unthinkable.

The film won the Golden Bear at the 2020 Berlin Film Festival, but Rasoulof was barred from leaving Iran and was unable to receive the award. Like his previous features, There Is No Evil has yet to screen in Rasoulof’s homeland of Iran.
Director
Mohammad Rasoulof
Cast
Ehsan Mirhosseini, Kaveh Ahangar, Mahtab Servati, Baran Rasoulof
Release Date
29-04-2021
Language
Persian
Run Time
151 minutes
You may also like