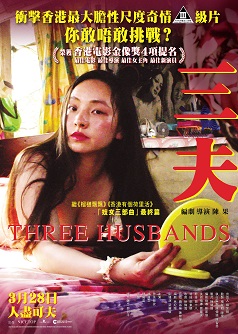 Even though this modern city returned to China more than 20 years ago, an entry permit is strictly required to cross the border between Hong Kong and other cities in China. BIG BROTHER is one of those poor types that regularly enters and leaves Hong Kong. Big Brother married his daughter MUI off to an old Hong Kong fisherman, SECOND BROTHER. Mui suffers from a medical disorder that will drive her to madness if she doesn’t have sex all the time. Making the best of a bad situation, the two men pimp her out. In the loneliness of the fishermen’s bay, only sex brings Mui joy. And the money helps support her family. LITTLE BRO makes his living around the bay. He falls in love with Mui after a wondrous sexual experience and later becomes her third “husband”. Amongst the men, he is the most learned and should have the strongest moral compass. But for the sake of bringing Mui happiness, Little Bro follows in the other men’s footsteps and finally becomes her co-exploiter too.
Winner of Best Film, Best Director and Best Actress of Hong Kong Film Critics Society Award. Nominated for Best Film, Best Director, Best Actress and Best New Performer of Hong Kong Film Awards.
Director
Fruit Chan
Cast
Chloe Maayan, Chan Charm-man, Chan Man-lei, Mak Keung
Release Date
28-03-2019
Language
Cantonese, Mandarin(In Parts)
Run Time
101 minutes
You may also like