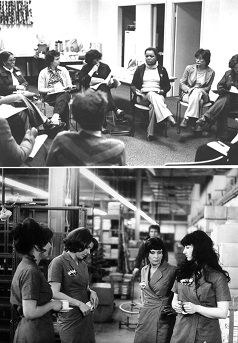 Movie Name:The Woman’s Film
Language: English(No Subtitles)
Category: IIA
Duration: 42 mins
Director: Women’s Caucus – San Francisco Newsreel
Story: Based on interviews with working-class women from across the racial spectrum in the US, the San Francisco Newsreel’s documentary offers a sharp snapshot of their subject’s plight as workers or homemakers. More importantly, it also records their growing awareness of their predicaments and the way they could confront the everyday discrimination they’ve lived with all their lives. The Woman’s Film evokes both the environment the women live in — one could nearly feel and smell the worn-down neighbourhoods, cramped homes and dreary workplaces — and also their street-fighting spirit in improving their lives and the world they emerge from. “It's so great to have women filming us because they’re using technical equipment and until I see it with my own eyes I thought it was something men were born with,” one interviewee said — a perfect summary of the importance of a film that’s made by women, about women and for women.

Movie Name: A Bonus for Irene
Language: German(English Subtitles)
Category: I
Duration: 49 mins
Director: Helke Sander
Cast: Gundula Schroeder, Sarah Schumann, Helga Foster
Story: Irene Arndt is divorced, lives in a lousy flat with his two children and holds down a badly paid job in a washing machine factory. There’s no room for self-pity, though, as she believes her well-being hinges on “a question of organization” — not just of her own life, but of all women and all workers. An activist-artist, director Helke Sander Sander was part of the Action Council for the Liberation of Women, a group which helped setting up daycare centres for the children of working mothers. A Bonus for Irene is a cinematic equivalent to that struggle, as it charts its protagonist’s fight in receiving fair treatment at home and at work. But the film’s hardly a polemic: humorous in her depiction of the tribulations of working-class women in a capitalist society, and hilarious in imagining what a “futuristic” factory would look like, Sander’s film is a winner all around.
Director
--
Cast
--
Release Date
12-07-2020
Language
Run Time
91 minutes
You may also like